Save Lives and Money by listening to your Car. 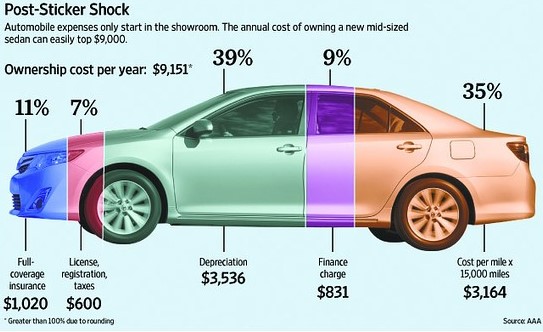 The blog zoomed in on better controlling - and hence lowering - of Repair & Maintenance costs. This blog explores how one can reduce the insurance, fuel and depreciation cost via measuring and managing driver behavior. The total cost per mile driven for these three groups are very significant: 51.2 cent / mile. This is 84% of total costs per mile.

Driver behavior information can directly lower insurance premiums, fuel costs, depreciation as well helps to lower the number of accidents and ultimately save lives. Technology can help to measure drive behavior and make it insightful. We will show that this will lead to improved road safety and lower costs. The basis of this is a detailed and objective understanding of the actual, individual driver behavior.

The traditional way of underwriting car insurance was with ‘cohort-based’ data such as age, marital status, income or kids. One statistically correlated the cohorts with different levels of insurance premiums. For example, a 20-year, single man will be charged higher premiums than 40-year, married woman with children. However, this kind of data only gives an aggregated estimation based on correlation. It does not give insights on the behavior of the individual driver. In other words: there also are young men who drive safe and there are also mums who drive dangerously.

Pay How You Drive (PHYD) insurance is a relatively new concept where the insurer allows for a premium discount based on your driving behavior. The actual sensor data (accelerometer, gyroscope, GPS, video) from an individual driver allows a more accurately underwriting of the policy. As an incentive for safer driving the insurance companies can offer lower premiums; and as such PHYD differentiates premiums between safe and unsafe drivers. By doing so, one gets fairer distributed costs as well change the behavior of the less safe drivers. When you look at it from the insurance companies’ point of view it helps them lower the claim settlement costs as there will be less accidents and damages. It is a win-win situation for the insurance company as well as the car owner.

As seen in the above figure the insurance cost accounts for 11% of the annual cost. This can be reduced considerably if the driving patterns are getting safer. On average consumers can receive about a 12%1 discount on their premiums.

When more people choose for PYHD based insurance policies, the road becomes a safer place as consumers are more aware that their insurance premium can be affected or even be rejected when their driver behavior is not safe enough. This will lead to less accidents; which will reduce car-related fatalities.

The insurer also can make direct feedback available to the driver when an event of ‘bad driver behavior’ happens. Examples of ‘bad driver behavior’ are e.g. hard breaking, harsh acceleration, harsh curbing. This feedback can be in the form of an app or device that is based on sensor data from the car. While driving the car, this app or built-in device contains algorithms that recognize elements of a dangerous driving style. If such a ‘bad event’ happens, the application immediately alerts the driver and makes him or her aware of the undesired behavior. This direct feedback has proven to be a very effective tool, especially for the younger generation of drivers. According to a research2 young drivers tend to improve their driving behavior (e.g. in the study it was found 21% of the drivers hard braked less).

The below graph shows how young people between 18-24 increase their score (i.e. become safer driving after receiving direct feedback). This proves that though young drivers who a have higher risk profile are more receptable to training and feedback as compared to drivers in older age brackets. This group of 18-24-year-old drivers happens to be the group with most accidents. A win-win situation as there is most to win where there is most at stake.

According to a research mapping fuel consumption, driver behavior data can save up to 10% fuel on an average. The cost benefit for the end consumer is big as safer driving leads to higher efficiency in fuel consumption as number of hard braking / hard accelerating is reduced. So direct (preferably real-time) coaching and specific feedback on an individual’s driving style will directly result into lower fuel costs and costs of accidents.

Due to long-term insights into the handling of the car a better individual depreciation value can be determined. I.e. was the car well-driven with low impact on ‘wear and tear’ or driven aggressively causing the car to depreciate more? When able to ‘proof’ a car has been handled and driven cautiously a higher valuation of its value can be warranted. The provider with whom the data is being shared can provide a certificate of ‘good car handling’ this then in return increases the value of the car by an estimated 5%.

Such certificate of ‘a car handled well’ therefore directly effects the depreciation value of that car. One can ‘get away’ from the generalized tables of residual values of cars based on only model, year and mileage driven. In this generic model one cannot differentiate between two cars of the same model, same year and same mileage; and where one car has been driven aggressively and the other very carefully.

What are the total cost savings on insurance for the consumers?

Teraki helps in these situations to increase the accuracies of the models in real-time by a more tailored data collection. Moreover, Teraki makes the applications in the car run 10x faster. In parallel, the data describing the situation can be synchronized between the car and the cloud up to 50x faster and is always within the safety-critical accuracy boundaries. Accordingly, the insurance premium can be updated faster and be ultimately personalized and enable both driver and insurer to reduce insurance cost.

The tangible and intangible benefits of monitoring and steering better driver behavior are significant. The tangible benefits are the lower insurance premium you save by sharing your telematics data with insurers; the lower fuel consumption due to smarter driving; and obtaining a warranted and higher sell price when selling your car. The intangible effect are safer roads, less accidents, less injuries and less fatalities.

In the next blog we will zoom in to how L2-L4 autonomous driving functionalities will lower the costs per mile even further. Just read our next, bi-weekly Newsletter or - if you’re not already enlisted yet - just sign-up here.

How will Semi-Autonomous Driving change a car's costs per mile?

Most people will have heard how autonomous driving will improve mobility and safety, but did you know about the costs saved by autonomous driving? In this blog we will describe why costs will be lowered with the implementation of (L2-L4).

Save lives and money by listening to your car

Save money by listening to your car

Directly after a car has been bought, an additional set of ongoing cost kick in. Owning a car will face the car owner and fleet manager with significant additional costs.